During my teenage years I swam competitively, and ended up on the Yale swim team. 1970s American college life sank my swimming career, new interests emerged. Jim Fitting, the famous Boston based harmonica player was a classmate. Inspired by him, I started to play.

Returning to Adelaide, I fronted the “Full House Blues Band” during the golden age of Australian pub bands. We had a weekly residency with big crowds, so I could hire the best players in town.

Come the 1990’s, pub bands were harder to run. I discovered bluegrass festivals, weekends in mountain locations, jamming day and night with exquisite players, if you were good enough. I fell in love with the tunes, and set to learning them.

Harmonicas are rare in bluegrass, the speed overwhelms most players. To counter this I developed a new tuning system, Major Cross, which eases the faster tunes. Custom harmonicas from Neil Graham have also been a great help.

Eventually I got the bluegrass tunes up to speed. For example, “Texas Gales”

In 2005 I taught electronics at a Chinese University, and hit on the idea of a Chinese harmonica teaching site. I met the right partner, Shiwee, together we created kouqin.com.cn. The Chinese site did well, I started on other music sites. The main focus has been online lessons, in particular with Harmonica Academy.

Through my Chinese site I became a judge at the Asia Pacific Harmonica Festival, held every two years. The Asians play tremolo and chord harmonicas, with amazing skill. I’ve taken to these instruments, adapting them to traditional American and Irish tunes in the Tony Eyers Trio and Cafe Harmonica.

Since 2008 I’ve written a column for Harmonica World, and even managed to get on to one of the covers. The articles are partly on learning harmonica, other topics also. Some previous articles are here.

In 2017 the Seydel harmonica company released a Tony Eyers harmonica model, based on my Major Cross tuning system. So, I’ve got my own harmonica! Details at seydel1847.de/major-cross

I also play baroque recorder and accordion, these instruments and their music shape my approach to the harmonica. 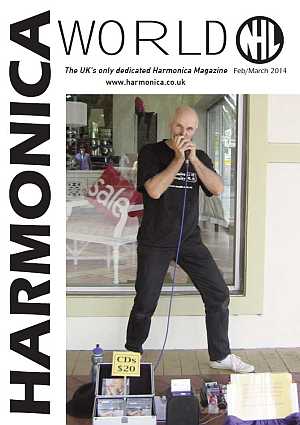