In grade 6 someone came to my classroom asking for recorder lesson volunteers. My teacher looked my way, wilting under his gaze I agreed. After 6 months I was the only boy in the class. I quit.

I maintained a vague interest in recorder, sharpened when seeing a brilliant French recorder busker in the London underground in the 1970s. I still remember his girlfriend. holding out a hat overflowing with coins. I vowed to do likewise in Europe, a decade later I did, albeit with fewer coins.

I began recorder studies in 1980, inspired by the Bach recordings of the great Andres Segovia. Back in Australia I studied with Catherine Weaver, then Hans-Deiter Michatz. In 1990 I met Amanda Muir, one of my musical soulmates. We formed Balmain Baroque, a five piece baroque band. Amanda sings and plays baroque flute. A baroque band needs a harpsichord, we bought one, shown opposite with Donn Mendoza playing.

I love the baroque repertoire, and am fortunate to perform it with skilled players. Recorder technique has a distinct bearing on how I play harmonica.

In 2014 I launched a series of online recorder lessons, at LearnRecorder.com 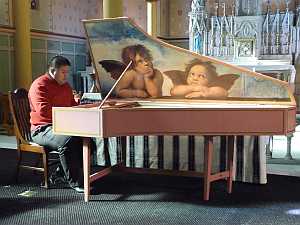